You are here:
Food History 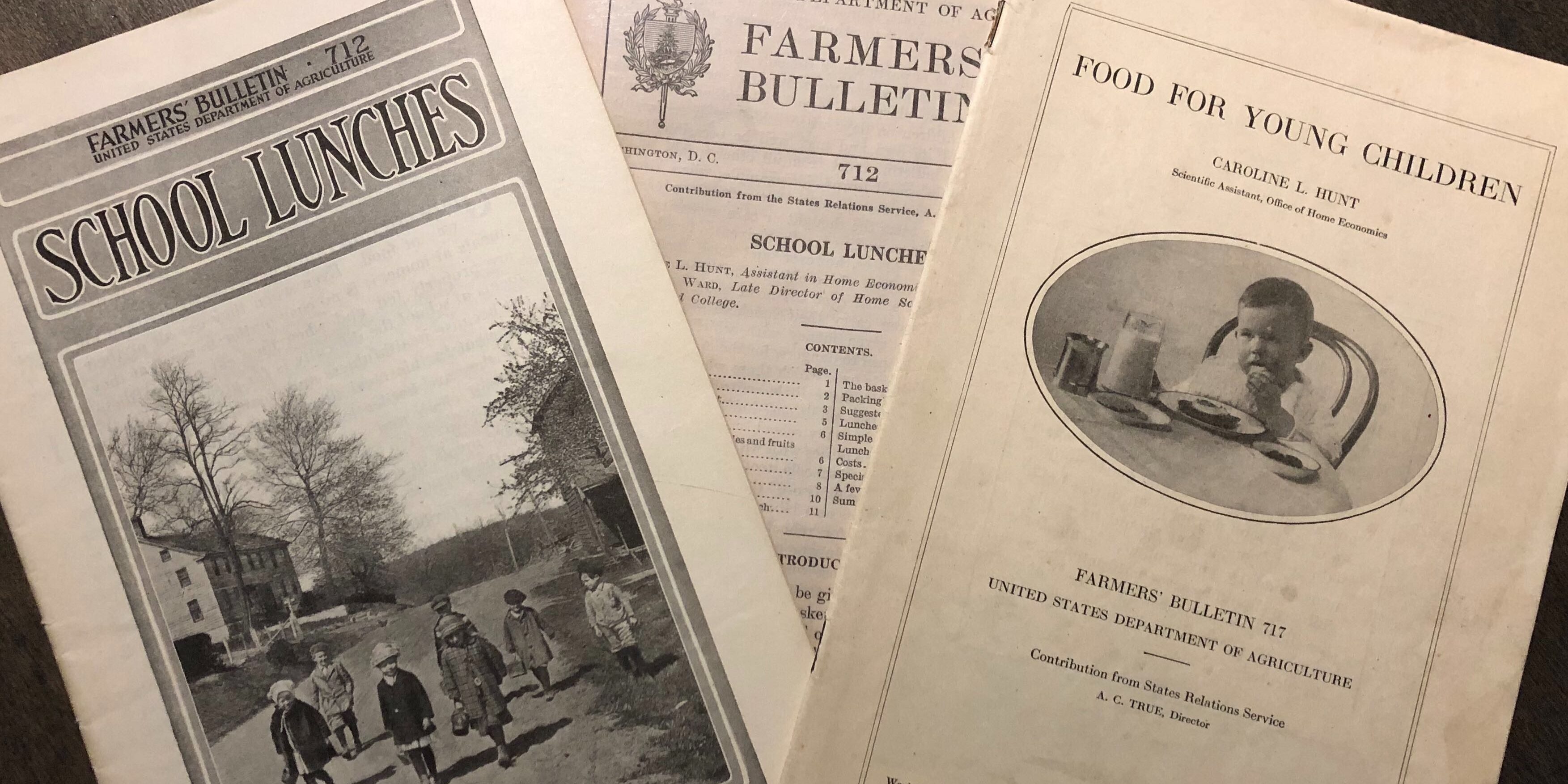 Today, it’s hard to imagine a time before the school lunch program. We all have memories – the good, the bad, and the disgusting moments during school lunch. And if we are honest, it was one of the best opportunities to socialize with our friends. Some didn’t have the same class schedule as us, or other school activities took up a few class periods. But lunch was something we all shared. This continues throughout life with the habituation strengthened with birthdays, holidays, vacations, etc. until, ultimately, food becomes the universal social lubricant.

We’ve become a society of one meal that takes breaks to work and sleep. The school lunch program wasn’t always there, but its history is steeped not only in wide-scale social transformation of eating habits, but also as an early mechanism to drive consumer habits under the heading of responsibility, duty, and health. While many loathe food marketing campaigns for good reason, when looking back It’s probably far more accurate to see these issues as mostly unintended consequences of a well-intentioned campaigns designed to combat real impact that economic scarcity of food had on malnourished children, primarily from undernutrition.

Today, we face a very different issue, the double burden of under- and overnutrition.  According to the World Health Organization:

When we go back to the original food groups created by the USDA, It’s interesting to read some of the explanation. Beginning in the 1916 USDA Farmers’ Bulletin 712, School Lunches, we have five primary food groups: Protein-Rich, Cereal or Starchy, Fatty, Vegetables and Fruits, and Simple Sweets as described:

Groups 1. The protein-rich foods. — Milk; cheese; meats (except the very fattest) ; fish; poultry; dried beans, peas, and cowpeas; peanuts; and others. The reasons for including peanuts are their high percentage of protein and the fact that in finely divided form they are used as sandwich filling. Other nuts are rich in protein but are at  present seldom used in the child’s diet in sufficient quantities to make it necessary to enumerate them here.

Group 4. Vegetables and fruits. — Here some confusion may arise because the term “vegetable” is sometimes used to mean all foods of plant origin and in this sense would include cereal, dried beans, and other foods which have been classified elsewhere. As here used it applies only to those which are used as side dishes with meat or as salads and in similar ways — potatoes, greens, lettuce, celery, green peas and beans, carrots, asparagus, and others. Under this heading come also all cooked or raw fruits, with the exception of those to which much sugar has been added (preserved or candied fruits, marmalades, and others) and dried fruits in which the percentage of sugar is high because most of the water has been driven off. Such sweet fruits are more properly classed under group 5.

We’re including peanut butter as “protein,” well, because kids like to eat it. That’s where it all started over a century ago. Lolly, lolly, lolly get your protein here. Of course, the protein list also includes legumes and surprisingly excludes fatty meats. It’s with these documents that the USDA began a full effort to address both the real needs of children faced with economic scarcity of food and at the same time, be an advocate for all farmers to promote their products. Today, we have 27 National Institutes for Health, but nutrition is still the domain of the Department of Agriculture. Again, they were attempting to educate the population on issues of diet that had deleterious impacts on health, particularly in younger children. The balanced diet was born:

“If, as a general rule, each of the above groups is represented, the diet is likely to contain all the important nutrients — protein, fat, starch, sugar, mineral matters, and growth-stimulating substances — in reasonably correct proportions, and to have an energy value sufficient for the child’s needs. If all groups are represented no one kind of foods is likely to be used in excess.”

A year later, in the 1917 USDA Farmers Bulletin 808, the groups transformed into: Fruits and Vegetables, Meats and Meat Substitutes, Starchy, Sugar, and Fat. What’s particularly interesting is how they saw sugar and fat in the diet:

Group 1. — Fruits and vegetables, such as apples, bananas, berries, citrus fruits, spinach and other greens, turnips, tomatoes, melons, cabbage, green beans, green peas, green corn, and many ”other vegetables and fruits. Without these the food would be lacking in mineral substances needed for building the body and keeping it in good working condition; in acids which give flavor, prevent constipation, and serve other useful purposes; and in minute quantities of other substances needed for health. By giving bulk to the diet they make it more satisfying to the appetite.

Group 2.— Meat and meat substitutes, or protein-rich foods: Moderately fat meats, milk, poultry, fish, cheese, eggs, dried legumes (beans, peas, lentils, cowpeas, peanuts), and some of the nuts. These are sources of an important body-building material, protein. In the case of children part of the protein food should always be whole milk.

Group 3. — Foods rich in starch: Cereals (wheat, rice, rye, barley, oats, and com) and potatoes (white and sweet). Cereals come near to being complete foods, and in most diets they supply more of the nourishment than any other kind of food. It is not safe, however, to live only on cereals. The grains may be simply cleaned and partially husked before cooking, as in cracked wheat and Scotch oatmeal; they may be ground into flour and used as the basis of breads, cakes, pastry, etc. ; or they may be partially cooked at the factory, as in many breakfast preparations ; or they may be prepared in the form of such pastes as macaroni, noodles, etc. In all these forms they furnish the body with the same general materials, though in different proportions.

Group 4.— Sugar (granulated, pulverized, brown, and maple), honey, molasses, sirup, and other sweets. Unless some of the fuel is in this form the diet is likely to be lacking in flavor.

Group 5.— Foods very rich in fat: Bacon, salt pork, butter, oil, suet, lard, cream, etc. These are important sources of body fuel. Without a little of them the food would not be rich enough to taste good.

In other words, if you don’t use sugar, then your diet will be lacking in it and food without butter or fat is dry and unpalatable. At least they didn’t completely make up excuses to eat these things. Of course, salt was prized throughout time, both as a pre-refrigeration food preservative, and its ability to transform otherwise bland and boring food into decadent delights. Thus, the sugar, salt, and fat drum began. Protein became more prominently associated with meat and milk began to be promoted as a somewhat perfect food for children.  They further clarify:

“Some food materials really belong in more than one group. Cereals, for example, supply protein as well as starch; potatoes supply starch as well as the mineral matters, acids, cellulose, and body-regulating substances, for which they are especially valuable; and most meat supplies fat as well as protein. For the sake of simplicity, however, each material is here grouped according to the nutrient for which it is usually considered most valuable.”

Despite knowing more about nutrition than any time in human history, we still hang onto this century-old grouping of foods. Yes, the USDA MyPlate is different, protein is once again a “thing,” but we still struggle with the idea that protein, carbohydrate, and fats aren’t isometabolic food groups. What is unquestionable is that this idea to group food seems to have irreversibly changed our perception of food forever from seeking sustenance, to one of seeking specific nutrition.

Today, our children are still driven under the auspices of nutrition education to seek particular products from USDA stakeholders. Of course, advertising – overt or masked – also drives those desires whether it’s “part of a complete breakfast” or child eye-leveled premiums for store shelf spaces. These are all direct descendants of these original eating guidelines from the Office of Home Economics and for decades we learned to cook in Home Economics at school. With these roots, it shouldn’t be a big surprise that economics plays a more significant role than nutrition and health in what and how you eat then and now. We hope to change that with the Food Triangle and the simple message to keep eating right.

Science and Saucery
Want to increase your healthspan? Science and Saucery is a show about food, health, and lifestyle transformation that will add life to your years. Learn how a single lifestyle modification—changing what you eat—can dramatically improve your quality of life and result in sustainable, lasting health benefits. Based on over a decade of research and longevity analysis, author and leading plant-based healthspan expert Ray Cronise introduces a revolutionary way of eating designed to help you lose weight, reverse disease, and achieve optimal health.
E046 – Deep Dive Into Oxidative Priority
by Ray Cronise

Grab your copy of Oxidative Priority Paper (bit.ly/oxidativepriority) and let’s take a closer look at it together. We’ll debunk some myths about fat storage and loss. We will discuss how metabolism is measured and why all calories count if you count all the calories. It’s going to be a little nerdy, but a lot of fun. 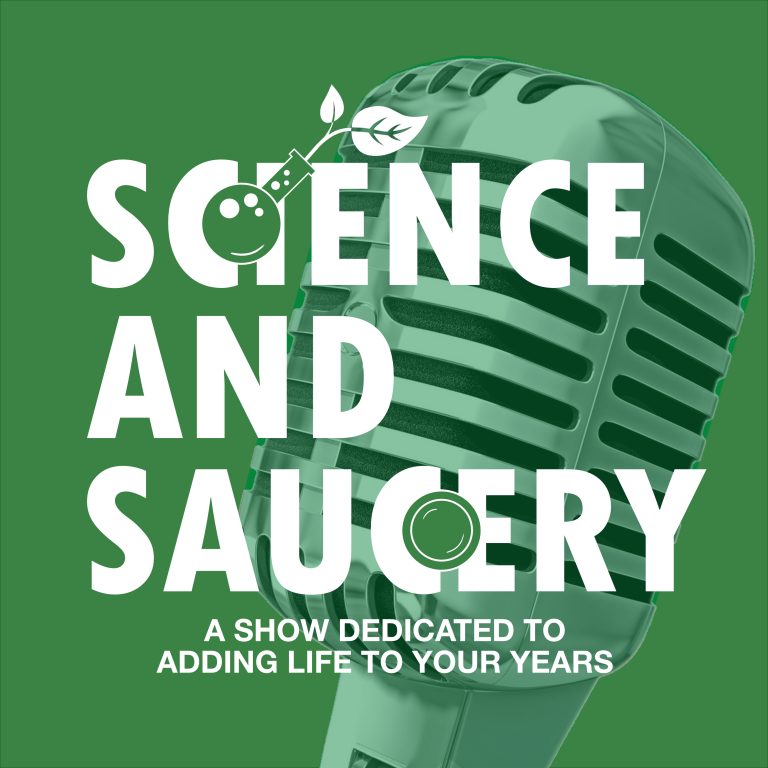