You are here:
Healthspan 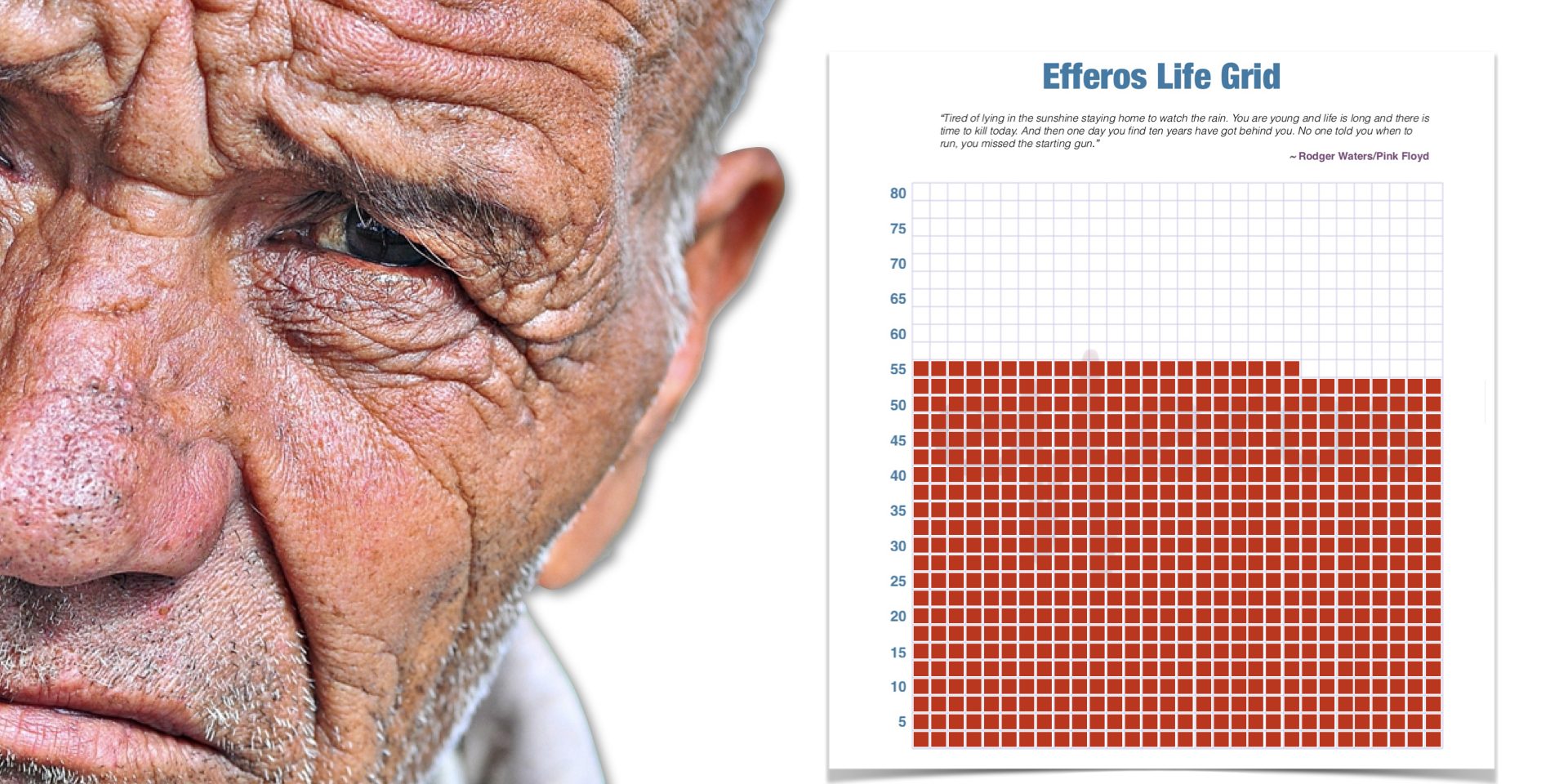 If you could go back in time a decade, what would you change? What about two decades? Isn’t it unfortunate that when we have the most wisdom and the most to offer our friends, family, and society that aging zaps life away? And what is aging? The reason commonly given against classifying aging as a disease is that it is a natural and universal process. Diseases are considered deviations from the normal state. What seems interesting is that when given a list of disease states one will likely die of, no one seems to be able to point to a few and suggest, let’s not cure these. If we were to in fact cure aging, would we cure death? Over the last few decades, scientists are understanding more about aging and it appears that there are no biological reasons to suggest that aging can’t one day be radically slowed and perhaps, halted.

Can We Make a Difference?

Returning to the question of what we might have done different in our youth or altering the days, weeks, months, and years we have ahead of us, how might we better assess our life? If you knew how many days you had left to live, how might you spend them differently? We routinely oversee clients making radical changes in 3 to 6 months. In 2007, I saw a talk by David Kekich and a mutual friend texted us both separately, insisting that we meet. David overcame an incredible accident that left him paralyzed and his story of rebuilding his life inspired me. A year later, I had my own shake-up in life, not as medically serious as his, but he guided me through unwinding and rebuilding. One of the the strongest memories I have from his presentation was a slide he had on “boxes” filled in his life. He remarked that his life boxes were getting full and he used that to advocate why we need to invest now in radical life extension to add more boxes. A year later, when I was forced to reboot my life, one of the first things I did was draw out that chart on engineering graph paper and begin to fill them in one by one. I saw the years as a child, my college time, and time at NASA. I thought about the many events, both positive and negative, that had occurred and compared them both on their emotional significance and also on their timescale to my total life. It was a powerful exercise. We now use this with many of our clients when they are facing radical lifestyle transformation.

Take for example one of our clients, John. He’s lost about 160 pounds and most of that was in a period from April through December. It’s been over a year and his health has never been better. Off of all medications now, his blood panels, blood pressure, and weight are normalized. At the often recommended (with no valid basis) of 2 pounds per week as a maximum for weight loss, those 160 pounds would have taken 1.5 years to complete and he did it in just 8 months. If we assume John will live to the average age of 80 years old, then his life can be represented by 960 months. 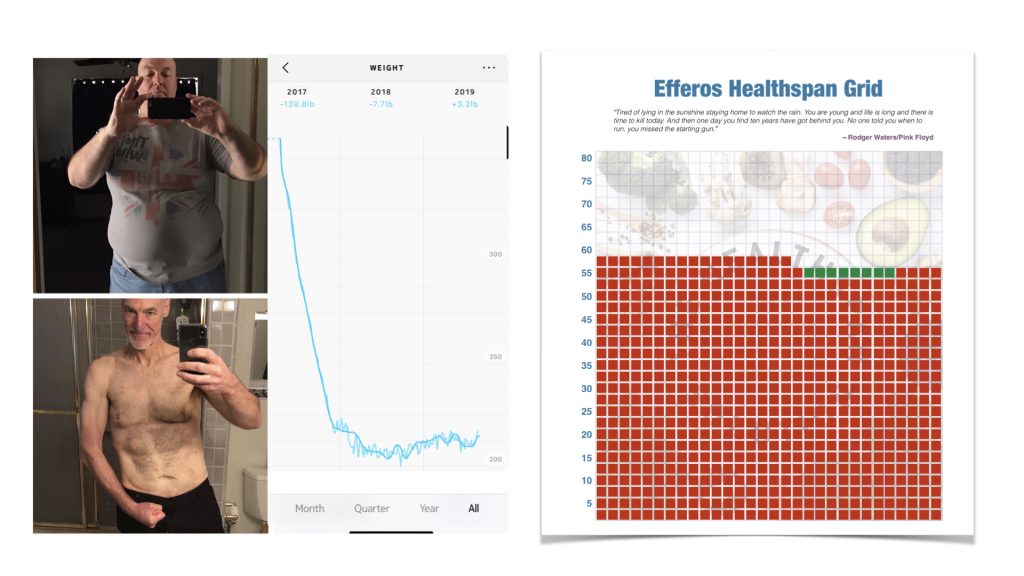 Each box represents a month of his life. He spent a majority of his life seemingly unable to make the changes necessary to correct his health and weight. When we began working together and he started seeing rapid results, his enthusiasm for his new diet of vegetables, fruits, whole grains, legumes, mushrooms, nuts, seeds, herbs, and spices was solidified. He no longer saw his new diet as one of deprivation, but instead one of abundance and a new life. Over that 8 months his new diet became convenient, familiar, and enjoyable. New habits replaced the old ones and It was so much joy for us to check in on his weight.

If one thinks about it, 3 to 6 months isn’t a long time to make a change when compared to the 960 average living months. It was less than one percent of John’s life (0.83%) and he had over 100 pounds to lose. My friends and family don’t like this chart, but I keep it on the refrigerator with a magnet. I color in each month and take a few moments to reflect on what I’ve accomplished and what I hope to accomplish in the next 30 days. In the past, when faced with major life decisions, I’ve often sat down using multiple colored pencils and shaded in various jobs, each of my children, extended projects, etc… just to give me perspective about what that “stuff of life” means in terms of time. It’s often helpful to put life back into perspective. Steve Job’s 2005 Stanford Commencement Speech is another way to spend 15 minutes reflecting on things that are important.

Not everyone has 160 pounds to lose or is facing cancer. What we all have in in common is that the disease state you are most likely to die from early is preventable, or at least can be significantly delayed, with diet alone. When we have the significant pharmacological breakthroughs that will come over the next decade, you’ll be better poised for that treatment. You can significantly slow aging and it’s important to keep in mind that a diet that wins the Olympics may not be the diet that wins the ultimate endurance sport of the longest, healthiest life. Download below and print our Healthspan Grid. Then grab your colored pencils. Doodle a bit while you reflect on all of the amazing things that you’ve experienced in the past and all the still incredible things you have left in the future on that bucket list. Check some boxes now so that you can create many more.

Science and Saucery
Science and Saucery
Want to increase your healthspan? Science and Saucery is a show about food, health, and lifestyle transformation that will add life to your years. Learn how a single lifestyle modification—changing what you eat—can dramatically improve your quality of life and result in sustainable, lasting health benefits. Based on over a decade of research and longevity analysis, authors and leading plant-based nutrition experts Julieanna Hever and Ray Cronise introduce a revolutionary way of eating designed to help you lose weight, reverse disease, and achieve optimal health.
Download
Share on facebook twitter linkedin email
E017-Interview with Penn Jillette
by Julieanna Hever and Ray Cronise

It’s a marathon interview with Penn Jillette and we’ll explore some areas of his weight loss and other adventures we haven’t discussed elsewhere. We’re excited to bring you this promiscuous Penn’s Sunday School & Science and Saucery podcast!